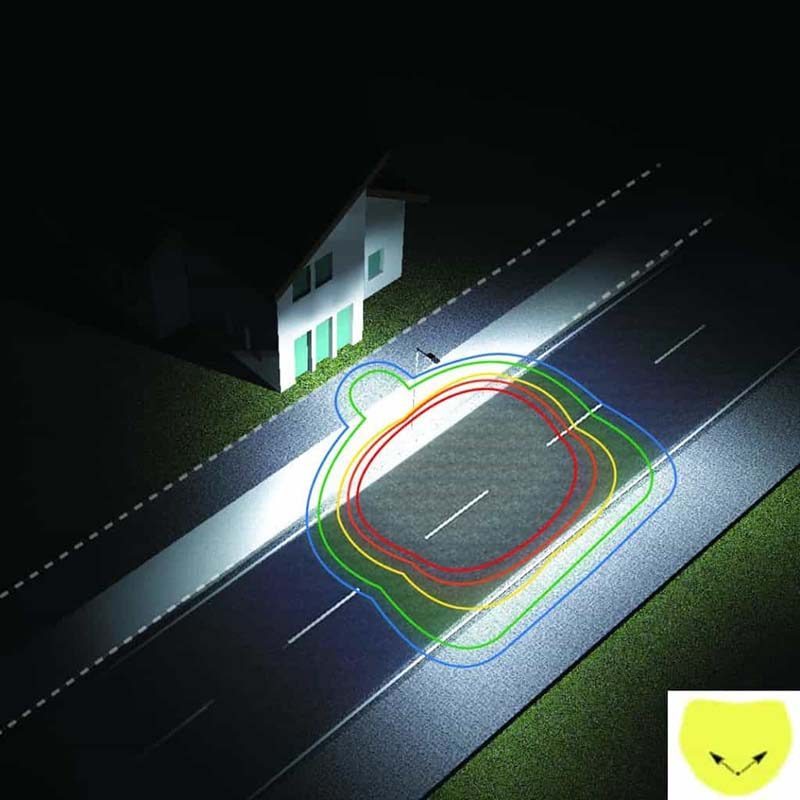 The road is a rectangular area extending longitudinally, so the road lighting fixture should distribute the light emitted by the light source in a reasonable space, and finally form a rectangular light spot with uniform brightness on the road surface. At present, LEDs used for road lighting are mostly high-power white LEDs. Considering the change of LED luminous efficiency with current, its working current is usually 350mA, that is, a single LED with a power of about 1W. The light intensity curve of this type of LED is Close to the Lambertian distribution, if the LEDs are simply arranged in an array to form a lighting system without optical design, then the final result on the road surface can only be a circular light spot with a bright center and a dark surrounding, which will inevitably lead to a waste of energy and cost. . Therefore, it is necessary to carry out secondary optical design of LED lamps to form a rectangular lighting area with uniform brightness on the road, fully and effectively use the luminous flux of the light source to achieve ideal lighting effects, and use high light utilization indicators to close LEDs The difference in luminous efficiency with high pressure sodium lamps.

By designing an optical lens and encapsulating it on a high-power LED light source, the light-emitting direction of the light source is changed through the lens, and the propagation direction is shifted, so as to improve the lighting utilization rate of the lamps and ensure the safety of driving at night. , the lens is mounted on the LED bracket, and the bracket has inherent high-power LED chips. The surface of the lens can be coated with an anti-reflection coating, and the cavity between the lens and the chip is potted with high-temperature resistant silica gel to reduce the multiple reflections of light in the cavity and directly refracted through the lens. Compared with the conventional L.ED lens, this lens has the effect of polarizing and antireflection, which is equivalent to integrating the secondary optical lens and the primary lens. According to the refraction of light, when passing through different propagation media, the light will appear on the interface The deviation of the propagation direction occurs, and the direction of the deviation is related to the angle of incidence and the refractive index of the passing medium. The top of the designed lens is a rectangle with rounded corners, which maintains a certain slope with the horizontal plane, and achieves the purpose of light deflection through light refraction.

The optical lenses suitable for LEDs are mainly divided into: reflection type, refraction type and combination of reflection and refraction. Different methods focus on different guarantee indicators. One of the reasons is that different secondary optical forms have different envelope angles relative to the LED light-emitting surface. The envelope angle refers to the angle at which a section line of the secondary optical structure contains the light source. Generally speaking, The larger the envelope angle, the stronger the control ability of the secondary optics to the light, and the more controllable factors in the design process.

The biggest feature of LEDs for lighting is the function of directional light emission, because high-power LEDs are equipped with reflectors, and the efficiency of such reflectors is significantly higher than that of ordinary lamp reflectors. In addition, the efficiency of the self-reflector has been included in the light efficiency detection of LEDs. Road lamps using LEDs should make use of the directional emission characteristics of LEDs as much as possible, so that each LED in the road lamps directly emits light to the target. According to each area of ​​the road, the auxiliary light distribution of the lamp reflector is used to achieve a very reasonable comprehensive light distribution of road lamps. It should be said that to truly meet the illuminance and illuminance uniformity requirements of CJ45-2006, CIE31 and CIE115 standards, the lamps and lanterns should contain three light distribution functions to achieve better realization. The LED with a reflector and a reasonable beam output angle itself has a good primary light distribution function. In the lamp, the installation position of each LED and the direction of the emitted light can be designed according to the height of the street lamp and the width of the road, and a good secondary light distribution function can be realized. The reflector in such lamps is only used as an auxiliary three-time light distribution method to ensure better uniformity of road illumination.

The secondary optical design of the LED determines the light distribution and light output efficiency of the L.ED street lamp, and is one of the most important components in judging the overall quality of the LED street lamp. In the actual design of road lighting fixtures, each LED can be fixed on the fixture with a spherical joint on the premise of basically setting the projection direction of each 1ED. When the fixtures are used in different heights and illumination widths , You can achieve satisfactory results by adjusting the spherical gimbal to make the irradiation direction of each LED. When determining the power and beam output angle of each LED, the power that each LED should have when the beam output angle is basically selected can be calculated according to the inverse square law of light intensity and illuminance distance, and the power and The LED driver circuit box gives each LED different power to make the light output of each LED reach the expected value. These adjustment methods are unique to road lamps that use LED light sources. By making full use of these characteristics, it is possible to reduce the lighting power density and achieve the purpose of energy saving on the premise of satisfying the illuminance and illuminance uniformity of the road surface.

Street lights are mainly used to illuminate the road, so they belong to local lighting. For street light products, different from the lighting requirements of car lights, flashlights and other products, the beam requirements have a certain range. The existing products in the market generally use lenses to solve this problem. LEDs with different characteristics are equipped with different curvature lenses. Interchangeability is not good. In order to solve this problem, the light source room adopts a reasonable combination method of built-in light guide planes with multiple angles, which is low in cost and can be applied to different LEDs (different LEDs have different emission angles, as long as they choose different light guide planes to install LED modules. Change the angle of the light), in addition, the light is a regular rectangular irradiation surface. The irradiation surface is wider, the brightness is increased, and the road surface is evenly illuminated. For the illuminance range, type and illuminance balance of street lamps on the road surface, LED modules with different powers can be placed on different built-in light guide surfaces to make the road light strong and balanced in the entire illuminance range.

What are the problems to be solved in the promotion and application of wind-solar hybrid LED street lights?