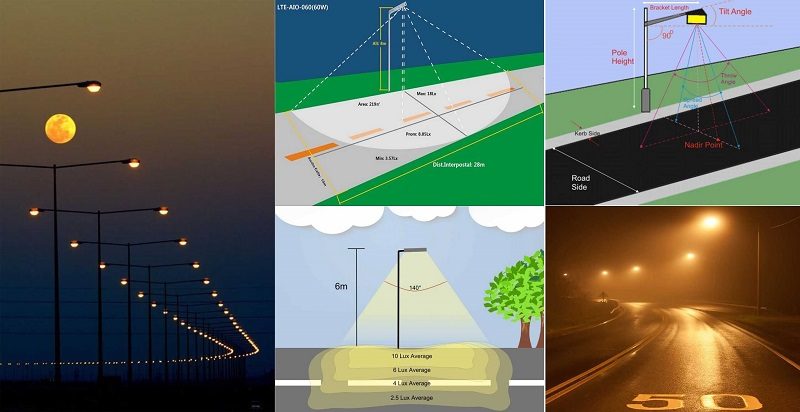 In terms of lamp shape, it can be designed into butterfly shape, bat shape, ellipse, rectangle, etc. to meet the brightness coverage and uniformity between the two lamp poles to the greatest extent, that is, to meet the total brightness uniformity, and to avoid the zebra effect. .

In the LED chip arrangement, more chips can be arranged on the periphery of the lamp, because the illuminance at a certain point is proportional to the luminous intensity of the light source and inversely proportional to the square of the distance. The greater the power, try to meet the light uniformity in the area between the two lamp poles.

In the design of LED lamps and lanterns, we must also pay attention to the treatment of glare, because LED is a point light source, a lamp is composed of many light-emitting points, and the wavelength of light emitted is relatively single, similar to lasers, the loss of light transmission in the air is more than ordinary The light should be small, which is irritating to people’s eyes and makes people feel uncomfortable, that is, the light emitted by the LED is not soft, which is a problem that must be solved. Otherwise, it will affect the driver of the vehicle, stimulate the eyes, cause visual fatigue and affect the driving safety. Therefore, the control of glare is very important. Reducing the luminous intensity can effectively reduce the glare, but it will reduce the illuminance. The use of a frosted lampshade or a translucent lampshade can make the light output by the LED soft, but at the expense of reducing the illuminance, the two It is contradictory. The key is to choose a reasonable choice between the two, that is, to minimize the impact of glare and reduce the illumination much.

The new LED lighting technology puts forward new requirements for the secondary optical design. Only through the lens and the reflector or the combination of the two to guide and condense the light, the LED lighting can have a customized effect. The lenses and reflectors of LED lighting devices produced by Sharp are provided by three companies, IdeaLED, DFO and LEDIL. Unlike traditional diffused lighting, LEDs emit light within a specified angle range, which minimizes light loss, and can focus or scatter the light emitted by LEDs as needed.

In order to demonstrate a system solution for LED lighting applications, Sharp introduced the optical design solutions of DoubleDome, Zenigata and MiniZeni series products. The bandwidth of the lens is suitable for Sharp’s multiple series of products, and developed a Zenigata module that can The process in which the optical part is directly connected to the module, that is, the entire LED module is potted. These so-called potting Zenigatal.ED modules can be directly used for street lighting.

In order to obtain a variety of products, lenses made of special plastics are used, with temperatures exceeding 100°C. Compared with mirror-based optical systems, this lens system has two major advantages. First, more efficient than most lenses. The reason is that the light emitted by the LED can be 100% diverted or aggregated from the lens. Furthermore, the lens can protect the lighting equipment from dust, dirt and water mist, and the lens is light in weight and relatively small in mechanical load, and can easily reach the IP65 safety level. Compared with glass lenses, plastic lenses have obvious advantages, such as lighter weight, good ductility, and strong plasticity.