What are the advantages of wind-solar hybrid street light LED light source? 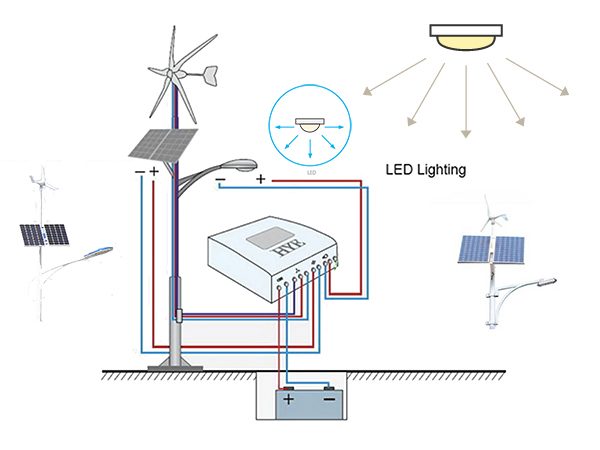 At present, the light sources commonly used in road lamps are high-pressure sodium lamps or metal halide lamps. The biggest feature of these two light sources is that the size of the light-emitting arc tube is small, and the small size of the arc tube produces a large light output, and has Very high light efficiency, the former including supporting electrical appliances, up to 1101m/W, the latter including supporting electrical appliances, up to 801m/W, but when this type of light source is used in road lamps, only about 40% of the light is directly transmitted through the glass The cover reaches the road, and other light is projected out of the lamp through the lamp reflector. At present, the traditional lamps that generally use such light sources basically have two shortcomings. Up to 50lx or more, this area is obviously over-illuminated, and the illuminance at the intersection of the two lamps is only 20% to 40% of the illuminance under the lamp. Second, the efficiency of the reflector of such lamps is generally only 50%~60%, so about 60% of the light output is projected onto the road after a loss of 30%~40%.

The overall efficiency of such lamps is generally around 70% (only the efficiency of such road lamps of international famous brands can reach 80%), and the excessive illumination in the above-mentioned over-illuminated areas is also a waste. Comprehensive analysis of the above-mentioned traditional road lamps, the comprehensive effective lighting efficiency (deducting the excessive lighting part) is only 50%. As the light source of street lights, the main advantages of LED compared with traditional street light sources are:

1) High light efficiency and energy saving.
Luminous efficiency (unit is lumens per watt 1m/W) refers to the ability of an electric light source to convert electrical energy into light energy, which is expressed by dividing the emitted luminous flux by the power consumption. The color temperature of the LED light source is 4500~6500K, and the color rendering index is above 85 , the color is closer to natural light. Compared with high-pressure sodium lamps, the light intensity required by the human eye to feel the same brightness is much lower. Therefore, 98W LED street lamps are used in road lighting, and the lighting effect is equivalent to 250W high-pressure sodium lamps.
The energy consumption of LED is small, and with the advancement of technology, it will become a new type of energy-saving lighting source. At present, the light efficiency of white LED has exceeded the level of ordinary incandescent lamps. According to the current development speed of LED technology, by 2015, the luminous efficiency of white LEDs may reach 150~200lm/W, far exceeding the luminous efficiency of all current lighting sources. In addition, the widely used fluorescent lamps, mercury lamps and other light sources contain mercury that is harmful to human health. The production process of these light sources and the waste lamps will cause pollution to the environment. LEDs do not have these problems, so it is again a “clean” light source.

2) The average lifespan is long.
Average lifetime [in hours (h)] is the number of hours in which the light output of a batch of light sources decays to fifty percent. The average lifespan of LED light sources is >50 000h, but there are too many factors that affect the lifespan in practical applications. In addition to the material and manufacturing process technology of the LED device itself, the LED combination, the design of lamps, the components supporting the control circuit, the heat dissipation , waterproof, dustproof, etc. will affect the life of the LED light source. Therefore, the life of LED light source > 50 000h can only refer to the theoretical life of the light source.
The basic structure of the LED is a piece of electroluminescent semiconductor material, which is placed on a leaded shelf, and then sealed with epoxy resin around it to protect the inner core wire, so the LED has good shock resistance. Since high-power LED street lights are composed of many LED light sources, even if some of them are damaged, it will not have much impact on normal lighting. Unlike high-pressure sodium lamps, all lights go out when they are damaged. High-power LED street lights have a lifespan of up to 50,000 hours. More than ten times that of sodium lamps, outdoor service life is more than 10 years.
The service life of solar cells can be as long as 20-30 years, which is unmatched by other energy equipment, and the service life of LEDs commonly used now can be as long as 100,000 hours, even in harsh outdoor conditions, the service life is 50,000. hours or more, the life expectancy of power LEDs is expected to reach tens of thousands of hours. Therefore, in some occasions where maintenance and equipment replacement are difficult, the use of solar cells and LED light sources can significantly reduce the cost of installation and use.

3) Automatic control.
The power of LED street lights can be adjusted according to the time and external environment to improve energy saving. LED can achieve a more perfect dimming function. Due to the large adjustable range of the working current of the LED, its light output is proportional to the working current, so the method of reducing the current can be used to adjust the light. In addition, since the frequent switching of the LED does not cause much damage to it, the dimming of the LED can also be realized by the method of pulse width adjustment. By adjusting the duty cycle of the voltage and the operating frequency, the luminous intensity of the LED can be effectively adjusted.

5) Effectively reduce glare.
The current street light is 180″ scattered, and the LED street light has a unique secondary optical design, so that the light of the street light is projected to form a rectangular light spot on the road surface, with almost no scattered glare, and no light pollution to the surrounding area. And the brightness distribution of the light field area Uniform, soft light, effectively reducing the driver’s eye fatigue, making driving safer.

7) The light-emitting response time is fast.
The response time of LED is only a few tens of nanoseconds, which is much faster than that of incandescent lamps, gas discharge lamps and other light sources. Therefore, in some cases where fast response lighting is required, it is very suitable to use LED as a light source. High-intensity gas discharge lamps such as high-pressure sodium lamps have a delay effect, and can reach 90%~100% of their luminous flux after 15 minutes of ignition, while high-power LED street lamps can reach normal brightness when they are powered on, and there is no delay in turning on the lights. Easy to implement intelligent control, more energy saving.

8) Safety.
LED lighting is a kind of solid-state lighting, which can be effectively shockproof and explosion-proof. It is especially suitable for highways with high vibration and tunnels and mines with higher safety requirements.

9) Excellent heat dissipation performance.
The structure design of low thermal resistance and good heat dissipation design ensure that the junction temperature of the PN junction of the LED will not exceed 75℃, thus ensuring the luminous efficiency and working life of the LED.

10) In the optical system of the luminaire, the luminous flux loss of the LED light source is the smallest.
Unlike traditional light sources, LEDs are light sources that emit light in half space. High-pressure sodium lamps or metal halide lamps are light sources that emit light in all spaces, and it is necessary to change the direction of the emitted light from one half of the space by 180 to the other half of the space. When relying on the reflector to complete, the absorption of light by the reflector and the blocking of the light source itself are inevitable. Using LED as the light source, there is no loss in this respect, and the utilization rate of light is higher than that of traditional light sources. The size of the LED illuminant chip is very small, and it can basically be regarded as a point light source when designing a lamp. It can be calculated according to the luminous flux distribution model of the point light source, which is relatively simple.
Because the distance between the two lights in the longitudinal direction of the road is about 40m, the lamps must irradiate the light to more than 20m, forming the intersection of the light between the two lamps, covering the dark area where the two lamps intersect. The LED lamps use a combination of multiple LEDs. According to the distribution position of the LED in the lamps, different driving powers are used to make the light evenly distributed on the road to cover the dark area between the two lamps.

11) DC power supply.
The voltage of the solar cell is 0.5~1.2V. Various DC voltage power supplies can be obtained through series and parallel connection. The LED drive also uses DC power supply. The working voltage of a single tube is generally between 0.8~3.8V. The series and parallel connections make the two very well matched, eliminating the need for inverters that are necessary to use other lighting sources. This improves energy utilization, saves costs, and improves system reliability.