What are the characteristics of LED lamps? 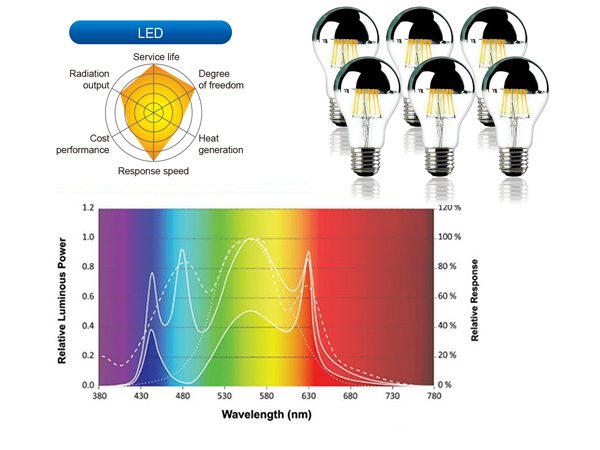 Different from traditional lighting fixtures, LED lamps have the characteristics of point light source, high power, narrow beam output, etc., so higher requirements are placed on the design of LED lamps. The design of LED lamps is a systematic project. To design high-performance LED lamps, we must first master the lighting standards and requirements and the light distribution principle of conventional lighting lamps. The spherical light reflector and the reasonable light distribution of the point light source can give full play to the advantages of the LED point light source, the controllability of the beam angle and the long life of the cold light source.

In the design process of LED lamps, the selection of LED light sources is very important. Because it directly affects the performance, cost and working life of LED lamps, some manufacturers today use a single LED module with an integrated package of more than 10W to make LED lamps in combination. Difficulty in light distribution, easy to produce glare, difficult overall heat dissipation and other defects. There are also 3~5W LED modules. Due to the low luminous efficiency per W of the module, there is also an overall heat dissipation problem. Compared with a single 1W LED, the price advantage is not obvious under the same luminous flux. Comprehensive consideration, it is more reasonable to choose 1W LED. Judging from the current technical level of high-power LEDs, 1W LEDs have relatively high luminous efficiency, and have obvious energy-saving advantages for lighting.

The selection of LED light color is also a factor worthy of attention. In the development of road lighting, there are two light colors of yellow light and white light. Yellow light is a high-pressure sodium lamp because it is economical and energy-saving, and at the same time has excellent fog-penetrating performance. Even so, yellow light also has its inherent shortcomings, which is its poor color reproduction ability. Under sodium lighting, the color of any illuminated object is yellowish and distorted. The pursuit of white light is natural sunlight. Because it has the best color performance, and sunlight is a warm white light. Therefore, if it can achieve white light similar to sunlight, and at the same time take into account the economical and energy-saving advantages of yellow light, it will be an ideal night lighting choice. The early stage of white light was metal halide lamp. Although it has a color performance more than twice that of yellow light, it has not been applied on a large scale due to some insurmountable technical problems such as poor fog permeability and low effective life, and LED light source is used. It can make up for this defect. The color temperature of the LED light source is about 3,500K, which is more suitable, which meets the lighting requirements in terms of photopic vision and comfort. Moreover, it is feasible in terms of the development and cost-effectiveness of today’s LEDs, and is suitable for the large-scale promotion of LED light sources in night lighting.

LED light sources have their own characteristics in terms of structure and optical characteristics. Therefore, LED lamps should be designed according to these characteristics. Today, some manufacturers use traditional lamp shells to replace LED modules. It is impossible to design high-performance LED lamps with transitional conduction heat dissipation. The problem is that the exterior shape of the lamp needs to be combined with the heat dissipation of the LED, and the heat dissipation depends on the area. The surface color of the existing conventional lighting lamps is far from meeting the good natural air convection environment required by the “Joule’s heat law”. The operating temperature of LED products should basically be controlled below 65°C (the international standard is 80°C, when the LED operating temperature reaches 85°C, the luminous flux will drop by half, and the wavelength will become longer, that is, red-shifted, and if it exceeds 90°C, there is a risk of damage) , The light distribution, heat dissipation, and sealing of the lamp body of LED lamps are very important. At the same time, the designed lamp body structure is also conducive to mass industrial production.

Heat dissipation is a key problem to be solved by LED lamps. LEDs are cold light sources, which do not produce scorching high temperatures like incandescent lamps and gas discharge lamps. Effectively dissipate it into the air to ensure that the LED works at a safe temperature, so that the LED lamps can truly reflect the advantages of long life.

Today, with the rapid improvement of LED performance, it shows greater potential in replacing metal halide lamps, to provide the same light output, the number of LEDs will be used, thus improving the economical availability of LEDs. Taking 100W metal halide lamp as an example, its average light output lumens is 35001m, and the number of LEDs required for this power level was 30 in 2007; it is expected that by 2012, the number will be reduced to 20, so LEDs will have A growing economic advantage.

In order to adapt to the trend of rapid improvement of LED performance and maintain the suitability of the design for a long period of time, some practical design strategies such as modular replacement, life cycle analysis and cost reduction must be adopted. First of all, in terms of replacing the metal halide light source through a modular approach, each LED light bar can use a fixed number of LEDs. With the continuous improvement of LED performance in terms of light output and other aspects, to provide the same total light output Fewer LED strips can be used, thereby reducing the cost of using LEDs, by replacing the golden meat lamp with a modular LED) approach as shown in Figure 1. Secondly, in the design process, it is necessary to effectively use the LED life cycle analysis, so as to predict the possible consequences in advance. For example, the cost associated with prototyping with the highest performance LEDs currently on the market is high, but as LED performance improves and prices fall, this approach can produce products with higher performance in the longer term. Competitive and longer life products. In addition, with the improvement of LED performance and the resulting reduction in the amount of a single design, it is also necessary to better plan related flexibility in LED driver design, so as to reduce the corresponding cost.

Due to the requirement of outdoor LED lighting fixtures to reach 1P65 level (waterproof and dustproof), the interior of the fixture cannot exchange gas with the external environment. When the LED lamp works for a long time, the internal temperature of the lamp increases and the pressure increases, which creates a pressure difference with the outside air, increases the pressure on the inner wall of the lamp, and accelerates the aging of the lamp. The use of a special breathing system can solve the problem of unbalanced pressure inside and outside the lamp, and further improve the stability of the lamp. The schematic diagram of the breathing system is shown in Figure 2(a). The special breathing system can filter water molecules and dust into the lamp, and realize the free flow of air inside and outside the lamp. Using graphite material to replace the traditional aluminum substrate for heat dissipation, the thermal conductivity of this material is twice that of the aluminum plate, which effectively ensures the heat uniformity of the product. Figure 2(b) shows the schematic diagram of the overall position of the lamp using the breathing system and the graphite material substrate. The life of the LED lamp depends on the following points:

(1) The quality of the LED chip, the light attenuation value.
(2) LED packaging quality, consistency and reliability.
(3) Only about 30% of the electrical energy input to the LED is converted into light, and most of it (about 70%) is converted into heat. The heat dissipation problem of the LED needs to be solved in the design to ensure that the LED has good working conditions.
(4) Constant current drive is the guarantee of the life and quality of LED lamps.

What are the design requirements for LED lamp housing and radiator?