What are the characteristics of small wind turbines? 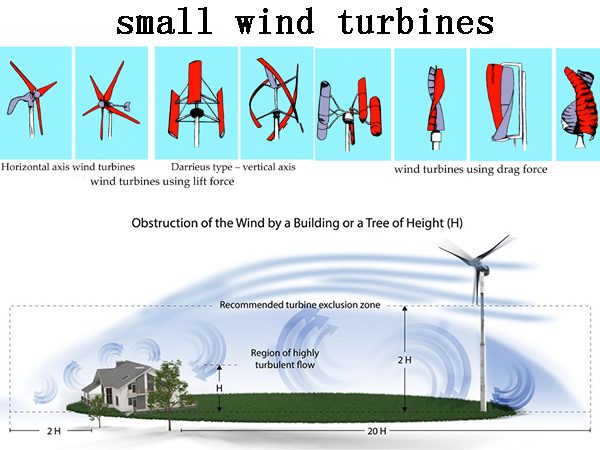 Wind energy is one of the energy sources without pollution, and it is inexhaustible and inexhaustible. For coastal islands, grassland and pastoral areas, mountainous areas and plateau areas that are short of water, fuel and transportation inconvenient, wind power can be used according to local conditions. As a clean and renewable energy, wind energy has been paid more and more attention by countries all over the world.

1. Classification of small wind turbines
The small wind power generation system is very efficient, but it is not composed of only one generator, but a small system with certain technological content: wind turbine + wind generator + controller + energy storage device. A wind turbine consists of a nose, a swivel, a tail, and blades. Each part is very important, and the functions of each part are: the blades are used to receive the wind and turn into electrical energy through the nose; the tail makes the blades always face the direction of the incoming wind to obtain the maximum wind energy; the swivel can make the nose flexibly rotate to achieve The function of adjusting the direction of the tail; the rotor of the nose is a permanent magnet, and the stator windings cut the magnetic lines of force to generate electricity.

There are many styles of horizontal axis wind turbines, some have wind rotors with reversing blades, and some horizontal axis wind turbines generate vortices around the wind rotor to concentrate the airflow and increase the airflow speed. The FD series small horizontal axis wind turbine designed with innovative technology has the following advantages
(1) The starting resistance of the wind turbine is greatly reduced, and the wind speed can be started when the wind speed is 2m/s. The best level in various countries is 3.5~4m/s start-up.
(2) The horizontal axis technology is adopted to reduce various mechanical losses and electromagnetic losses in the operation of the motor, so that the power generation under the same wind speed is increased by nearly 20%, especially the power generation at low wind speed is significantly improved.
(3) After using the horizontal axis technology to reduce various losses of the motor, the service life is also greatly extended.
(4) The shell of the wind turbine is made of high-strength aluminum alloy by precision die-casting process, light weight, high strength, no rust, corrosion resistance and salt spray resistance,
(5) The generator adopts high-efficiency and high-temperature resistant materials, and the stator components are treated by vacuum dipping process, which greatly improves the insulation performance and service life.
(6) The wind wheel is carefully designed by aerodynamic optimization software, with high utilization rate of wind energy and low operating noise. The impeller is dynamically balanced to ensure quiet and smooth operation. The blades are made of advanced polymer composite materials, which have good strength and toughness, light weight and no deformation. Its tensile strength, service life and consistency are much higher than wood blades, fiberglass and plastic blades.
(7) The whole machine adopts anti-rust treatment, and all external fasteners of the motor are made of stainless steel. The service life is greatly improved in rainy and salt spray areas.
(8) The structure is simple, no professional knowledge is required, and the installation and debugging work can be completed with simple operations with ordinary tools.
(9) The controller of the FD series wind turbine adopts intelligent control, and has the indication function and automatic protection function for the normal charging, overcharging, overdischarging and other states of the battery. And automatically brake when the wind turbine is no-load to prevent accidental speeding.

The Darrieu type wind turbine, which uses the lift of the airfoil to do work, is the main competitor of the horizontal axis wind turbine. Darieu wind turbines come in many forms, basically straight blades and curved blades.

In theory, the rotary-wing wind turbine does not require a windward device like the horizontal-axis wind turbine, but it also has the problem of speed limit exceeding the working speed. In order to limit the speed, its mechanism must be complicated, and the advantages of its simple structure no longer exist. The wind turbine has not yet entered the stage of popularization and application due to some technical difficulties that have not yet been resolved.

The earliest vertical axis wind turbine is a circular arc-shaped double-blade structure (Φ type or called Darryl), which has not been vigorously developed due to its small wind receiving area and high corresponding starting wind speed. H-shaped wind turbines are closely related to the development of science and technology, especially the development of computer technology. Since the design of H-shaped vertical axis wind turbines requires a large number of air-hole mechanics calculations and digital simulation calculations, it takes at least a few Years, and not one calculation can get the correct result, so in the age when computers were not very developed, people could not complete this design idea at all.

The H-type vertical axis wind turbine adopts the principle of air tunnel mechanics. For the wind tunnel simulation of vertical axis rotation, the blade adopts the shape of an aircraft wing. When the wind rotor rotates, it will not be deformed and change its efficiency; it is composed of vertical straight lines. It consists of 4-5 blades, the blades are fixed by a 4- or 5-angled wheel hub, and the wind wheel is composed of a connecting rod connecting the blades.

Because this design structure adopts the special air tunnel mechanics principle, the connection method of the triangle vector method and the direct drive structure, the force of the wind rotor is mainly concentrated on the wheel load, so the wind resistance ability is strong; the characteristics of this design It is also reflected in the impact on the surrounding environment, no noise during operation and small electromagnetic interference, which makes the new vertical axis wind turbine very obvious.

At present, Japan produces the most products of this type of vertical axis wind turbines. At present, the United Kingdom, Canada and other countries are also developing. Most of the products in these countries use parallel connecting rods in the design of wind turbines. The shaft requirements are high, the structure is relatively complex, and there are many on-site installation procedures. In addition, from the mechanical analysis, the larger the power of the H-type vertical axis wind turbine, the longer the blade, the longer the distance between the center point of the parallel rod and the center point of the generator shaft, the worse the wind resistance. Therefore, the triangular vector The connection method of the method can make up for some of the above shortcomings.