What are the main technologies of LED lighting fixtures? 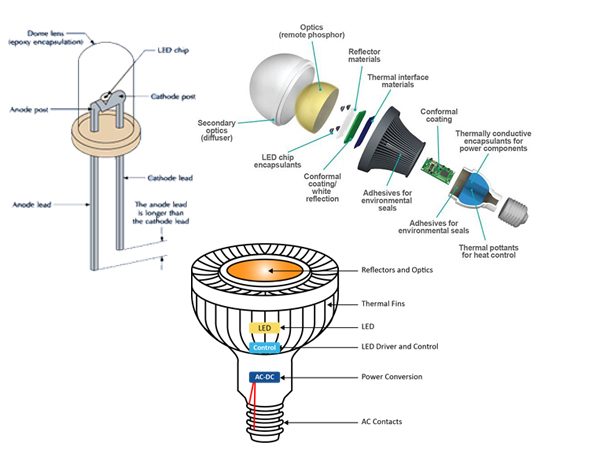 (1) Thermal management of the lighting system.
LEDs are generally referred to as cold light sources, because the principle of LED light-emitting is that electrons directly emit photons through recombination without thermal processes. However, due to the existence of Joule heat, LEDs also emit heat while emitting light, and for high-power and multiple LED applications, heat will accumulate. LEDs are different from traditional lighting sources such as incandescent lamps and fluorescent lamps. The service life of LED lighting fixtures. Because LED is a temperature-sensitive device, when the temperature rises, its efficiency drops sharply, so the system structure design and heat dissipation technology development of LED lighting fixtures are also issues to be faced in the application of LED lighting fixtures, because forced air cooling is usually not possible in light sources. Therefore, as the input electrical power increases, heat sinks and other methods of enhancing natural convection cooling can play an increasingly important role in the design of LED lamps.

(2) Improve color rendering.
At present, white LEDs generally use blue LEDs to superimpose yellow-emitting yttrium aluminum garnet (YAG) phosphors excited by blue light to synthesize white light. Since its luminescence spectrum only contains blue and yellow spectrums, there are problems of high color temperature and low color rendering index, which do not meet the requirements of ordinary lighting, and the sensitivity of human eyes to color difference is much higher than that of light intensity. Sensitivity, for lighting, the color rendering of the light source is often more important than the luminous efficiency, so adding an appropriate amount of red-emitting phosphors and maintaining a high luminous efficiency is an important issue in LED white light lighting.

(3) Secondary optical design of lighting system.
Traditional lamps and lanterns have long used incandescent and fluorescent light sources as reference objects to determine the optical and shape standards of lamps. Therefore, LED lamps and lanterns should be designed to abandon traditional lamps and LED light-emitting modules. The optical characteristics are fully considered and specially designed for LED light sources. Lamps of different structures. Since all LEDs currently have small lenses, so that their beams are concentrated in the range of about 80 degrees, in order to make the illuminance wide and uniform, a secondary optical design is usually required. There are many methods for secondary optical design, But its ultimate purpose is the same, which is to achieve uniform illuminance. The most ideal is a triangular illuminance curve, but it is impossible to achieve in actual design. The achievable illuminance curve is usually called a bat-wing optical system design content It mainly includes the following aspects:

Since the light beam emitted by the LED is concentrated, it is easier to control, and it does not require a reflector to focus the light, which is beneficial to reduce the depth of the luminaire. For example, using a flat mirror optical system, only 1~2 LEDs can be used to illuminate a large surface, while The depth of the lamp is very shallow; and using the light guide technology, the LED is directly installed next to the light guide, which can greatly reduce the volume occupied by the light source and other components, making it an ultra-thin lamp.

(5) Improve reliability.
Some people call the LED light source a long-life lamp. As a solid-state light-emitting device, its theoretical lifespan is more than 100 000h, which is much longer than that of traditional light sources. Therefore, it can be used in some occasions that are not easy to replace and maintain, and its maintenance cost can be greatly reduced. However, this advantage cannot be seen in many practical applications at present. Instead, the user sees that the light decay is serious and the life span is short, and it will break down in less than 10,000 hours. LED is the most commonly used indicator function LED (Φ3~Φ5mm) in the electronics industry. It uses a simple electronic circuit to increase the current to increase its luminous intensity, so that the LED only obtains a short-term high brightness, but it loses the expected brightness of the LED. life. Therefore, in the design of LED lighting fixtures, high-power LEDs should be used as the light source of lighting fixtures.