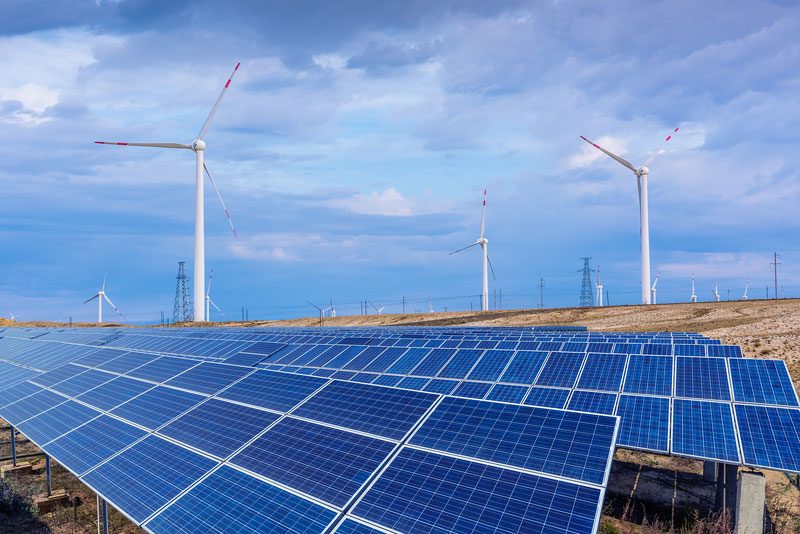 The use and development of wind and solar energy has a history of more than three thousand years. It is an ancient and young science, a practical and close-to-life science, a renewable science that can protect the environment, and it is now available. The science of sustainable development is an industry that can benefit from one investment for many years. Among the many new energy fields, the development and utilization of wind power and solar power are the first to be developed and prioritized. It is a major international hotspot today, because the use of wind and solar energy does not require mining, transportation, waste discharge, and environmental protection. The technology of pollution is a century-old project to protect the earth and benefit future generations.

Wind energy and solar energy are both clean and extremely abundant renewable energy sources. my country has a vast territory and rich wind energy resources. It is 2.5×108kW. The annual radiation energy projected by the sun onto the ground is as high as 1.05×1018kWh, which is equivalent to 130×106 million tons of standard coal. China’s solar energy resources are very rich, with theoretical reserves reaching 170×104 million tons of standard coal per year, and the annual average daily radiation in most areas is above 4kWh/m2. There are many ways to apply wind and solar energy, among which power generation is one of the most common and important forms.

Wind energy and solar energy are non-polluting and inexhaustible renewable energy sources. Small wind power generation systems and solar photovoltaic systems have been initially applied in our country. These two power generation methods have their own advantages, but wind energy and solar energy are both unstable. Basically stable power supply. Solar energy and wind energy are highly complementary in time and region. my country belongs to a monsoon climate zone. Generally, the winter cluster is large and the solar radiation intensity is small; the summer wind is small and the solar radiation intensity is high, so they can complement each other in seasons. During the day when the sun is the strongest, the wind is very small, and at night after the sun sets, the light is very weak, but the wind energy is strengthened due to the large changes in the surface temperature. At night and in rainy days when there is no sunlight, wind power is generated, and solar power is generated on sunny days. When there is both wind and sun, both work at the same time, realizing all-weather power generation, which is more economical, scientific and practical than using wind and solar energy alone.

Wind energy and solar energy have their own advantages and disadvantages. Except for geographical and natural environmental constraints, the cost of manufacturing wind turbines is only one-fifth of solar cells. The combination of the two can complement each other appropriately. Solar energy and wind energy are in terms of time and seasons. The complementary nature of the wind and solar hybrid power generation system has the best matching in resources. The wind and solar hybrid power generation system is a high-performance independent power supply system.

The so-called wind and wind complementary, in short, refers to the combination of wind power and photovoltaic power generation to form a power generation system. In the view of researchers and investors in the new energy field, the use of solar cells to convert solar energy is relatively expensive and is affected by sunshine time; while wind power systems have low system costs and low operation and maintenance costs, but their quality and reliability are relatively high. Difference. Combining the two, they can complement each other’s shortcomings and promote their respective strengths. However, wind and solar hybrid power generation technology does not simply add wind and solar energy, it also involves a series of complex technical data calculations and system design. In the promotion and application of wind-solar hybrid power generation technology, the key to competition is the comprehensive configuration capability. Finding the best matching solution requires a lot of research work, repeated calculations, demonstrations, market research, selection of components, assembly, etc., which have constituted the best matching solution to realize the seamless connection of wind and solar energy. When there is light The solar cell converts light energy into electrical energy. When there is wind, the wind turbine is used to generate electricity. When neither is available, the load can work with the electrical energy stored by the storage battery.

Wind-solar hybrid power generation technology integrates small-scale wind power technology and solar photovoltaic technology, and integrates new technologies in various application fields. It involves many fields, wide application scope, and great technological differentiation, which cannot be achieved by various separate technologies. Comparable. Wind energy and solar energy are currently the most mature, large-scale and industrialized industries in the world in terms of new energy utilization. Both wind energy and solar energy alone have their development disadvantages, while wind power and solar power are both Complementary, the combination of the two new energy sources can achieve the best rationality for the comprehensive utilization of new energy in terms of the allocation of natural resources, the integration of technical solutions, and the comparison of performance and price, which not only reduces the satisfaction of the same demand The unit cost is lower, and the application range of the market is expanded, and the reliability of the product is also improved.

The perfect combination of wind power and solar photovoltaic power generation has laid the foundation for the large-scale, industrialization, and marketization of the two new energy sources. Early small and medium-sized wind turbines were used in remote areas due to good natural conditions, low cost, and shape. Does not require aesthetics, and does not require high technical requirements. It is transferred to economically developed areas with relatively poor natural conditions, low industrialization, high technical requirements, relatively high cost, and beautiful appearance. Due to the large differences in regional environment and demand, the requirements for wind-solar complementary power generation technology have increased, such as low wind speed start, low voltage energy storage, anti-strong typhoon, anti-salt spray corrosion, intelligent control, and a series of technologies are constantly being developed. Schedule.

Both wind power and photovoltaic systems have the problem of imbalance between power generation and electricity load due to the uncertainty of resources. Both wind power and photovoltaic systems must store energy through batteries to provide stable power supply, but the daily power generation is greatly affected by the weather. It causes the battery pack of the system to be in a state of power loss for a long time, which is also the main reason for the reduction of the service life of the battery pack.

The wind-solar hybrid independent power supply system that comprehensively utilizes wind and solar energy is a low-cost, high-reliability power supply, and it also opens up a new way to solve the current energy crisis and environmental pollution. Wind-solar hybrid power generation system is a new achievement of scientific utilization of natural resources.

According to the wind energy and solar energy resources in different regions, and different electricity demand, users can configure different wind and solar complementary power generation modes. In theory, wind and solar complementary power generation are used in the design. Wind power is the main design, and photovoltaics are the best match. The premise of the plan is to achieve seamless connection between wind energy and solar energy, achieve seamless connection and conversion, that is, without power failure, and at the same time have good safety performance against bad weather. In addition, a series of external factors such as the climate, sunshine time, maximum and minimum wind speed, noise, etc. of the application area should be considered to optimize the configuration of wind turbines and solar cells. In order to improve the continuous working ability of solar and wind energy, on the one hand, the equipment manufacturing cost is reduced, on the other hand, the use of natural energy time is strengthened, and the time of using the battery is reduced, and the service life of the battery is increased.

At present, in the domestic and foreign markets, the common wind and solar hybrid systems mainly have two uses. One is the independent wind and solar hybrid power generation system, which is mostly used in areas far away from the power grid or not conducive to laying power supply lines. The production and living standards of people in a region have greatly improved. The other is wind-solar complementary LED street lights. Most of these lamps use a discharge resistor for a single brake. The speed of the wheel is used to control the speed. The effect of such passive braking is unstable. Once the controller or the discharge resistor fails, the purpose of braking cannot be achieved.

What is a solar cell module?